PPL Corporation (NYSE: PPL) announced that its Pennsylvania utility, PPL Electric Utilities Corporation, is proposing to build a major new regional transmission line that would make electric service more reliable and enhance the security of the electric grid while reducing the cost of electricity for consumers. 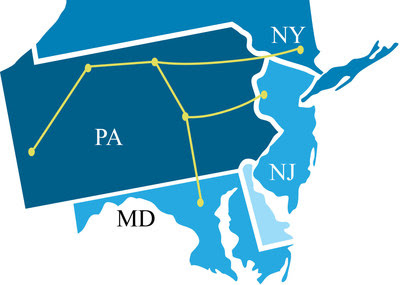 PPL Electric Utilities submitted the project to PJM Interconnection as part of the competitive solicitation process under FERC Order 1000. As currently proposed, the 500-kilovolt line would run about 725 miles from western Pennsylvania into New Yorkand New Jersey, and also south into Maryland.

By delivering lower-cost electricity into the region, and by enabling the development of new power plants fueled by lower-cost and cleaner-burning natural gas, the project is expected to create savings for millions of electric customers in several states including Pennsylvania, Maryland, New Jersey and New York, according to the PPL Electric Utilities analysis submitted to PJM.

The project is in the preliminary planning stages. If approved and built as proposed, the line would help replace supplies of electricity that will be lost when existing power plants retire. It also would help prevent power shortages during periods of extremely high demand, like the prolonged severe cold weather this past winter.

“This is a forward-looking project with significant benefits for customers, for several states and for the region as a whole,” said Gregory N. Dudkin, president of PPL Electric Utilities. He noted that the company has extensive experience planning, obtaining approval for and building major regional electricity infrastructure projects.

The company has begun a comprehensive regional planning effort to determine the best route and final details of the proposed line. As always with such projects, the company would have an inclusive public outreach process and would consider public input when making a final route selection.

“The project would help secure this region’s ability to deliver adequate supplies of energy for decades to come,” said Dudkin. “In addition, it would make the electricity delivery network more reliable and more secure over a wide swath of the Mid-Atlantic region.”

The preliminary timeline envisions completion of the project between 2023 and 2025, assuming all necessary approvals are received and construction begins in 2017. Approvals are needed from various regulatory and regional planning entities.

PPL Electric Utilities will be meeting with appropriate state and federal agencies as planning for the project moves forward. Further details of the project will be made public as they become available.

PPL Electric Utilities, a subsidiary of PPL Corporation (NYSE: PPL), provides electric delivery services to about 1.4 million customers in Pennsylvania. The company owns and operates 4,500 miles of electric transmission lines, and currently is building two major high-voltage transmission projects, the Susquehanna-Roselandline and the Northeast-Pocono Reliability Project. The company consistently ranks among the best companies for customer service in the United States. More information is available at www.pplelectric.com.

PPL Corporation, with 2013 revenues of $12 billion, is one of the largest companies in the U.S. utility sector. The PPL family of companies delivers electricity and natural gas to about 10 million customers in the United States and the United Kingdom. PPL recently announced an agreement to combine its competitive market generating company with the competitive generation business of Riverstone Holdings LLC to form Talen Energy Corporation, the third-largest independent power producer in the country.  More information is available at www.pplweb.com.